Affordable Housing Gap: A Collective Approach to a National Problem

EDITOR’S NOTE: This is the first of a series of articles giving an in-depth look at the state of affordable housing in Greater Omaha.

It could be argued that affordable housing is the greatest challenge facing the Omaha-Council Bluffs area with the potential to stifle its growth.

Without affordable housing, how can Omaha draw in top talent in industries with vast shortages, such as technology, health care, education and manufacturing.

Currently, nearly one-third of Omaha and Council Bluff’s population is overburdened by housing costs, paying over 30% of their monthly income on rent or mortgages, according to the most recent Assessment on Housing Affordability.

Thirty percent of a person’s income is nationally recognized as the max housing payment for that housing to be affordable.

Beyond attracting talent, it also poses a threat to retaining the talent already residing in the Omaha-Council Bluffs area.

The same assessment noted that to live in an affordable, safe two-bedroom house or apartment you would need to make a minimum of $19 an hour.

Forty-five percent of Omaha-Council Bluffs residents make under $20 an hour according to the last study released from the Bureau of Labor Statistics for 2020.

“These are your nurses, your law enforcement, your teachers, folks that serve you at the restaurant and the folks that clean up after you in the hospital,” said George Achola, vice president of real estate at Burlington Capital and Habitat for Humanity Omaha board member.

“I think we’ve got to reframe how we look at this problem, because it affects a larger portion of our society than we think.”

At the root of the problem isn’t just the rising cost of living, but the pent-up demand.

Of the 98,500 units needed to meet current demands, the Greater Omaha area only has 20,000 dedicated units, or roughly 20%, the study noted.

“All too often, what we typically think of as “affordable housing” is naturally occurring, meaning that it is affordable simply because of the age and condition of the property,” said Meridith Dillion, executive director of Front Porch Investments. “When households are desperate to have a home that is within their range, they are often forced to select from a limited set of options, and often those homes are not safe or quality housing.”

Front Porch Investments highlighted the Flora Apartments, which had to be completely vacated by residents in January of this year when the city of Omaha deemed it too dangerous to live in.

Over the past 10 years the city of Omaha has facilitated 37 projects, equating to 1,427 affordable housing units, through its Tax Increment Financing (TIF) Program.

“Tax Increment Financing is a financing tool that is also an incentive for community and economic development,” said Bridget Hadley, city planner III – economic development manager. “It provides, or allows, for the tax revenues generated from a completed project, to be used to pay back a loan that a developer had to incur to fund the project.”

While those units will increase the number of potential available units (developers can back out and receive nothing), it is still woefully short of the demand.

Presently, the city of Omaha is working with RDG Planning & Design and M&L Associates to form an action plan that is estimated to be completed by the end of the year. However, based on current projections it is unlikely that the city will be able to meet demand alone.

“We need a coordinated community strategy if we’re going to solve this problem,” Achola said. “It’s going to require every level of the community from the government to the private sector, to an individual, which includes you and me.”

Over the next few months, Midlands Business Journal will be digging into how three areas — corporate, private and public — are converging to help solve the affordable housing crisis.

This issue, we start with one employer making a big commitment to help its employees.

When COVID-19 entered the Omaha community, Streck President and CEO Connie Ryan did what she could to help her employees. She increased wages and paid her manufacturing employees overtime, which in turn kept the company distributing medical supplies.

But she knew it was only a Band-Aid on the real problem: affordable housing.

Affordable housing in the communities surrounding Streck, which is located at 108th and Harrison streets in La Vista, was an issue long before COVID-19 made it undeniable. Between 2011 and 2019 average rents in the area rose 23%.

The most recent Assessment on Housing Affordability, Needs and Priorities for the Greater Omaha Area noted that 19% of homeowners and renters in western Sarpy County were spending between 30-50% of their income on housing.

Ryan knew that the lack of affordable housing, combined with insufficient public transportation, would be the biggest barrier in her company’s growth.

It was simple: Streck couldn’t attract and retain the workforce it needed for growth if there wasn’t available affordable, quality housing.

That’s when Ryan made a bold move. Streck would create the affordable housing needed.

“Other options felt like a halfway approach,” she said. “I felt that the people we are trying to attract would find living in Sarpy County safe. I also believed that it would be a way to build diversity in the company.”

The housing will come in an 84-unit apartment complex, named “The Nest,” and will be just south of the company’s new multimillion dollar manufacturing addition. It will sit on part of Streck’s 30 acres of land and is being fully funded by the company.

Partly behind the decision to foot the entire bill was the conviction that Streck, under Ryan’s direction, knew what features and amenities would speak to current and future employees.

“I felt that I knew what should go in these apartments,” she said. “I didn’t want to be beholden to the government if we could afford it.”

In addition to wood flooring and durable finishes, Ryan said the other item she felt strongly about was having quiet dishwashers in every unit.

“This might be funny, but the kitchen is central to each layout, and I didn’t want a dishwasher that was going to be clanging through the night,” she said. 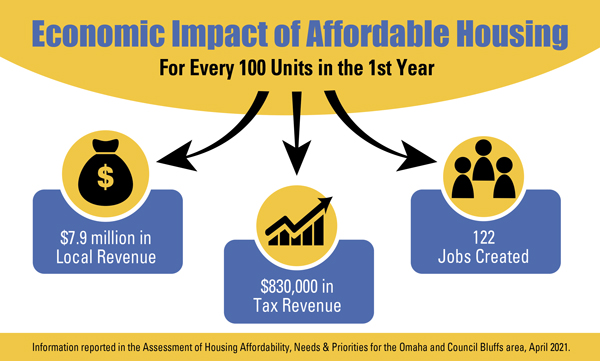 Achola was first exposed to the nuances of affordable housing when he worked for the Omaha Housing Authority and helped then Executive Director Brad Ashford bring over 300 units online in three years.

“Once I got involved in that world, I learned quite a bit about affordable housing and the vital role that it plays in the community,” Achola said. “I think a lot of people don’t understand how critical affordable housing is to the other structures, such as police and schools.”

Ryan and Achola met on the Habitat for Humanity Omaha board of directors and discussed the project before teaming up.

“We’re looking at some type of what I would call an available subsidy, depending on the level of employment, and the employee’s need,” Achola said.

Essentially what would happen is an employee would pay up to 30% (the max income percentage allocated to rent to be considered affordable) and Streck would pick up the balance.

Ultimately, Achola hopes that more employers will see the success that he’s confident Streck will have and follow suit.

“I think what we need to understand is that all of us have a stake in making sure that we have affordable housing,” he said. “The government alone is not going to be able to solve this problem.”