The Blair Freeman logo’s pinkish-purple, traditionally feminine accent color suggests that this construction company is different from its peers. The owners wanted a strong, contemporary icon with a hue that none of their competitors were using, but it’s fitting in another way: Blair Freeman is the only 100% woman-owned and minority-owned Class A contractor in Nebraska. And in a male-dominated industry, the majority of its 28-member team is female.

Blair Freeman provides a full spectrum of services to commercial and residential clients and also has a team of real estate agents that operates under the brokerage house Nebraska Realty as Blair Freeman Home. They never set out to hire women over men when they founded the company in 2018, President Ashley Kuhn and Executive Vice President Maranda Adams said.

“When we started our company, we said we wanted the best candidates,” Kuhn said, explaining that women in the industry took notice and came to them. “Our company gives that safe place for growth, so people naturally gravitate.”

“Ashley and I embrace the fact that we are women leaders, and people do see us. And it’s inspiring because we’re in a male-dominated field,” Adams added.

“Women see that and are drawn to that. We’re thankful that we have some amazingly talented people on our team and that they thought enough of us to share those talents with our company. 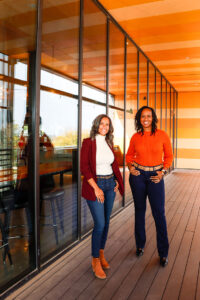 The company name comes from the women’s family names; Kuhn was Ashley Freeman before marriage and Adams was Maranda Blair.

“We dialed back to our maiden names because it’s a woman-owned business and we wanted to pay homage to that,” Kuhn said.

Family is also part of a vision reflecting both women’s belief that a focus on humanity is paramount in business, Kuhn said.

“We always think from a people-first mentality and our core values are really surrounded around people,” she explained. “If you put people in the position to succeed, the business naturally is going to also succeed.”

We can do this

“That was where we started doing residential real estate and investing in renovations,” Adams said.
The couple purchased a historic North Omaha building with the intention of starting a business in 2018, but the restoration was a nightmare project. Costs skyrocketed, the contractor jumped ship, and the work that did get done was subpar.

Adams reached out to Kuhn, who she knew from their student years at the University of Nebraska-Lincoln, to help salvage the investment. The problem project was their first collaboration and launched Blair Freeman.

“I reached out to Ashley because she was on the commercial development side, and we put our heads together and figured it out. Going through that process made us realize that there are probably a lot of people out there running into some of the same challenges and same roadblocks. And how many are just saying, ‘I’m not going to do it anymore,’ and they throw in the towel? They don’t have resources and somebody in their corner to help them navigate that,” Adams said. “So then it was like, ‘We can do this. We can be those people and that company.’”

Both sides of the table

“The biggest differentiator is that Maranda and I have sat on the owner’s side of the table… We’ve felt how it feels to sit across from your contractor or whoever you’re using and hear them tell you they’re behind schedule or over budget or you’re not going to get the project you wanted because of X. And you really just don’t have any control and you may be really didn’t understand why, but you kind of have to just eat it,” Kuhn said. “Most folks in the construction industry have just been on the side where they’re telling the news. We’ve been there, and our goal is for someone to never to sit across from us and feel out of control on their project.”

With their formidable skills and experience, the pair was optimistic from the start that Blair Freeman would eventually take off, Kuhn said. They didn’t expect it to fly so high so fast, however.

“I don’t think we could have ever anticipated that our community and our network would be so intentional about making sure we were considered for work right out of the gate and eliminate a lot of the barriers that would prohibit companies from being able to scale at the pace that we have,” Kuhn said.

“We always had a growth mindset and always envisioned growing and being successful,” Adams said. “We were surprised at the rate at which it did grow… and how quickly it started happening.”

They strive to create a positive, even fun, company culture and make a good leadership team, Kuhn said. “We balance each other well.”

“We approach things with a very similar mindset, we’re doers, we get the job done … We’re like-minded in our goals, our vision, and what we want for the company. I’m a big people person. Ashley always says I give people grace and that I’m the sweet one,” Adams said, adding, with a chuckle: “And she calls herself ‘the hammer.’”

Kuhn said that as a relative newcomer with an unusual makeup, Blair Freeman doesn’t sit still with “the way we’ve always done it” explanations.

… it’s tied to something to keep women out of the industry or people of color.”

Business is booming, Kuhn said, proving that she and Adams are succeeding in a competitive industry.

“There are still people that think it’s a man’s world and that the only people who could possibly know what’s going on are men,” she said. “And so you definitely have to know what you’re talking about when you’re walking into a room; you have to be the smartest and you have to show up a little bit more intentionally than men do … you are constantly having to re-prove that you know what you’re talking about.”

“We have been really well-received in our community, so it’s not often, but sometimes people do second-guess or question. So it feels like we do have to go just a little bit above, just a little bit beyond because we’re women and we’re Black women,” Adams said. “But once we get in the room and people see who we are and what we do well, it dissipates from there.”

They are already starting to change the face of the industry.