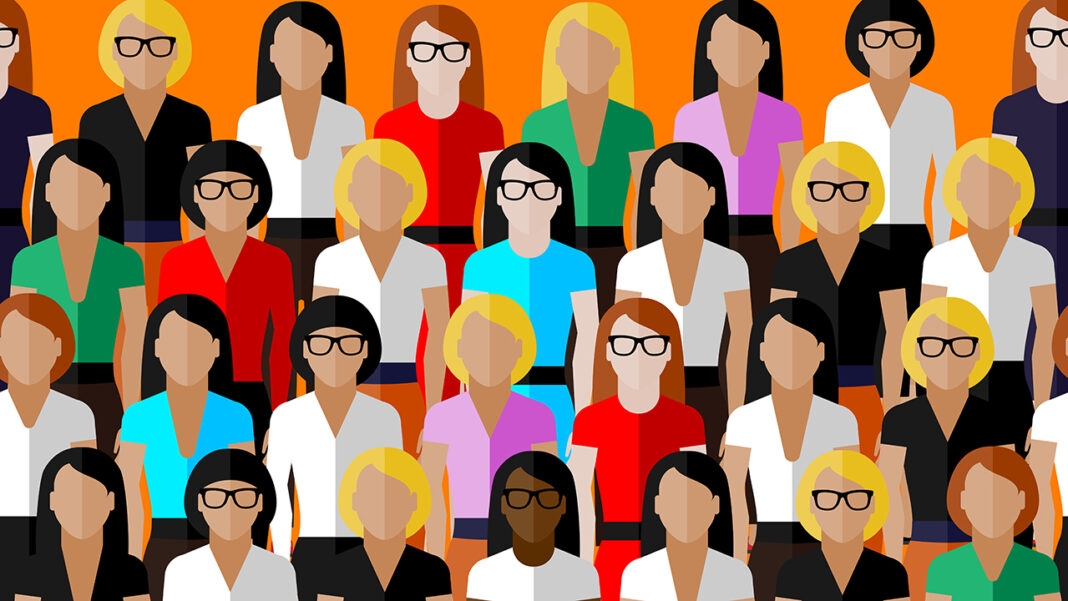 If there’s one thing women are undeniably known for, it’s their strong work ethic. Over time, business women across the globe have continued to grind, gain influence and make a positive impact in their communities despite any roadblocks that have stood in their way. For many local women leaders, the path to success has involved trials, triumph, and wisdom — which they say is all part of the journey.

Over the years, more and more women have entered what are often referred to as “male-dominated” industries — such as engineering, tech and law, to name a few. Undoubtedly, these women are shifting the dynamic and diversifying these fields.

As a woman in the tech industry, Puja Kandel, principal owner of CMIT Solutions, said she got to where she is today by believing in herself first and stepping out of her comfort zone by having a variety of mentors — including men.

“I have also embraced challenges by being patient, determined and focused, which has been a critical key to succeed and avoid any obstacles on my way,” Kandel said. “My advice to women aspiring to be in similar roles is to be confident in your decisions and surround yourself with a network of highly successful people and learn from your mistakes. Be realistic and stay positive. Good things will happen if you make great choices.”

Doreen Blakely, owner of Modern Matriarch Distillery, has been inspired by family and guided by faith throughout her journey as a woman in the business of distillery.

“I was not raised with a male vs. female mentality,” Blakely said. “When I was very young, my mother told me I could achieve anything I set my mind on. It wasn’t because I was a female, it was because she believed in me. I graduated valedictorian because my mother believed in me. Unfortunately, she died of cancer the prior year. God gives me the talents and I just use them to the best of my ability.”

Blakely said everyone faces challenges regardless of sex, and it’s important to approach obstacles as an opportunity to learn and grow.

“When one door closes, another opens,” Blakely said. “If you want it bad enough and it is meant to be, it will happen. The greatest lesson I learned is to be patient.”

Establishing a career is challenging for everyone, but being a woman can add an extra layer. Karen Goracke, president and CEO of Borsheims, said it can be intimidating to walk into a room and be the only woman present.

“I am lucky enough to work in an organization, industry and community that welcomes my perspective, work ethic and curiosity,” Goracke said. “I am fortunate Warren Buffett has such strong regard for women in the workplace. When you are surrounded by positive people, it empowers you to showcase your best.”

Working hard and building relationships with teammates, competitors and clients has helped Steph Guy, principal at Alvine Engineering, navigate working in a male-dominated industry. In fact, she said these bonds have turned out to be just as rewarding as the technical aspect of most engineering projects.

“For me, making professional connections started early, and some of those connections led to internships in college and even job offers,” Guy said. “You just never know when those connections will change the entire projection of your career. That’s what happened with me – I met Doug Alvine while in college, but it wasn’t until eight years later that I decided to work with him at Alvine Engineering.”

It’s a common saying that “they don’t teach law students how to become a lawyer in law school,” and Amy Lawrenson, partner at Baird Holm, said this statement couldn’t be more true. Instead, she said she owes a great deal to both men and women, attorneys and others who mentored and sponsored her throughout the different stages of her career.

Lawrenson has certainly overcome her share of obstacles throughout her timeline — like when she first tried breaking into the real estate industry in 2007, which turned out to be terrible timing. However, this turn of events caused her to move to the insurance and investment world for several years, which ended up being a great background when she moved back to real estate.

Success does not happen overnight. Instead, local women say it’s an experience that involves diligence, hard work, confidence and positivity, among many other important factors.

Whether a woman is just starting out or they are established in their career, one fundamental step is seeking out mentors who can advise and support them in their professional endeavors.

“It’s important to find people you trust and admire, whether inside or outside of your organization,” Goracke said. “My next best advice is to be inquisitive — immerse yourself in the business or industry you want to be in and learn as much as you can about every aspect of it. Knowledge is power.”

It is also true that traditional leadership training, while important to learn industry trends and best practices, cannot alone prepare one to lead people who bring complex experiences and expertise to teams.

Jo Giles, executive director for Women’s Fund of Omaha, said listening and learning from a variety of people and perspectives prove critical to navigating relationships and challenges. More so, it’s a good idea to create one’s own “personal board of directors” who can serve as trusted mentors, connectors, and critical thinkers to guide career preparations.

“Network, network, network to expand your circle of opportunity,” Giles advised.
In addition to learning from others, it’s vital for women to focus on being their own person, too. It’s equally important to ask questions, follow one’s heart, persevere, let one’s spirit shine, and keep showing up everyday, Blakely said.

While it may also sound cliché to some, Blakely said success is often in the eye of the beholder.

“Unless you walk in my shoes, you truly don’t understand my journey,” Blakely said. “People see what they want to see. I am exceptional because I am a child of God. Most don’t want to hear that success comes from the Father, but it is true. We are all unique and have a part to play. My best advice to women is to listen to your spirit, follow your heart and always ask questions.”

Angie Ringling, president of Spin Linen, has never looked at her gender as making her an underdog. Rather, she’s put her head down and worked really hard to pave her way.
“I’ve felt respected by both genders because I just never made a big deal about it and showed that I was good enough based on my merit,” Ringling said.

While not always easy to do, asking for what one needs is necessary to advance toward goals. As a woman, and especially a working mother, Guy said she sometimes has to remind her male counterparts that her needs may be different from theirs — and that’s OK.
“Don’t be intimidated to take a seat at the table,” Guy said. “Share your ideas. Women have great ideas and different perspectives and shouldn’t be afraid to share them. Be firm, but respectful.”

Additionally, she said finding a good mentor and confidant, whether it is someone in the industry or not, to share experiences and seek advice when needed is essential.

Lawrenson’s advice to women is that they don’t have to trek the most difficult path. Alternatively, it’s important to learn from other women and ask for their help and guidance whenever needed.

“You don’t have to take the same path as them to your ultimate goal, but you can still learn from them,” Lawrenson said. “Also, don’t treat the women beside you or behind you as your competition. For true equity and equality of women in the workplace, the advancement of women can’t be treated as an exclusive club. Pass what you learn around and back.”

It goes without saying that business leaders must create a culture where women feel valued and have the support and tools they need to succeed. Without offering these tools and support, organizations are disregarding the basic needs of their women employees, and therefore, are at risk of losing talent.

Goracke said she’s very fortunate to lead a company that’s dedicated to developing female leaders and promoting from within, but its commitment to female empowerment extends beyond its four walls.

To this point, Borsheims has recently announced several partnerships with strong, inspiring women.

“We were the first Nebraska brand to endorse a Nebraska university female athlete as part of NIL,” Goracke said. “More recently, we unveiled a collaboration with Rachel Balkovec, an Omaha native who’s breaking down barriers as the first female manager in affiliated professional baseball. Sales from ‘The Rachel Balkovec Collection’ at Borsheims will benefit Omaha’s Women’s Center for Advancement.”

Another critical way that businesses can support women in the workplace is by offering paid leave, as it allows women to stay in the workforce and recognizes women as committed employees and primary caregivers. According to Giles, most parents unfortunately have zero days of paid leave.

By offering paid leave, Giles said businesses will benefit from reduced turnover and increased loyalty and productivity, not to mention a competitive advantage in recruiting new talent.

“Business leaders also can support affordable, quality child care in their communities, so workers are not forced to take time off the job, scale back to part time, or drop out of the workforce altogether,” Giles said. “Due to Nebraska’s tight economy, many employers have difficulty finding workers. Increasing access to affordable, dependable childcare brings more eligible workers for our businesses.”

Ringling said it’s important to develop good leaders in the workplace — regardless of gender.

“I’ve seen some great employees come out of both and I love working with hardworking and determined people who want to better themselves,” she said.

It’s also true that a women’s resource group can be a huge asset to recruiting, supporting, and advancing women. Lawrenson currently chairs Baird Holm’s Women’s Initiative, which includes all of its women identifying attorneys. The group provides personal and professional development through programming, mentorship, and networking. The women meet on a regular basis and discuss everything from effective communication styles to business leads.

“This group offers an important sense of community and has been a key to engaging and retaining our women attorneys,” Lawrenson said.

Every aspect of society is better when women are able to participate authentically, and Ashlei Spivey, co-owner of Best Burger and founder of I Be Black Girl, a community initiative helping Black women connect in Omaha, said women, especially Black women, have been at the helm over every movement — leading change, innovating and creating.

Women have transformed the landscape of business for the better and continue to bring positive change to the communities they live and work in.

In the end, when it comes to empowering, being empowered, and reaching success, Spivey said the best bet a woman will ever make is on herself: “So, take the risk always and do it — whatever that ‘it’ is.”