Home Base: Council Bluffs Prioritizes Sense of Place for Workers

There’s a lot to like about Council Bluffs these days. According to 2019 statistics by Data USA, the city’s population has held steady, wages are up 4% year over year and poverty is down 5% year over year. Council Bluffs has quietly become a boutique city, popular among the younger set (the median age is just 38) and brimming with green space, entertainment and promise. To ease growing pains, local organizations are deploying initiatives and programs to attract and retain workers, provide housing and improve quality of life for residents. 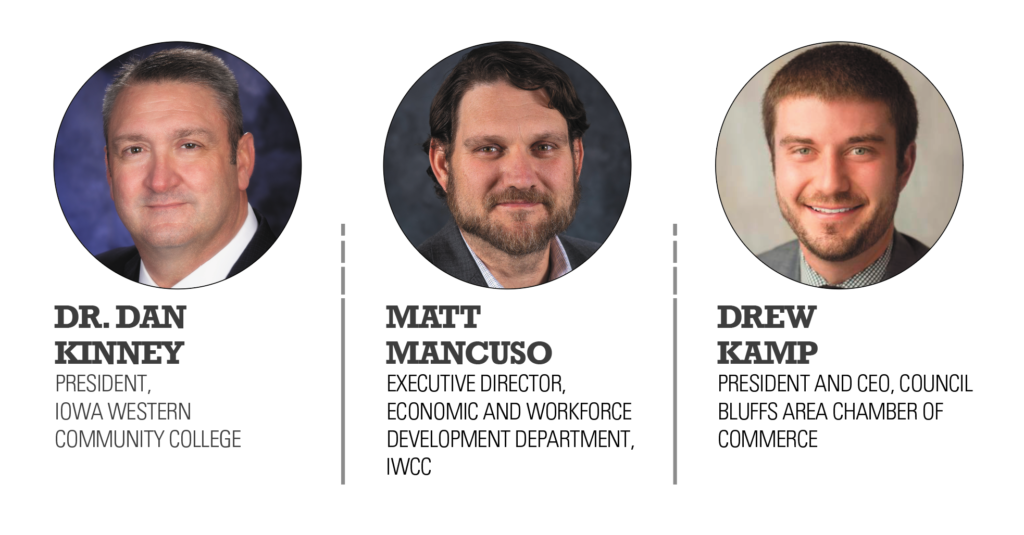 Perhaps nothing weighs more heavily on the minds of local business and industry than the labor shortage, a problem playing out on a national scale. A report by the U.S. Chamber and Chamber Foundation’s America Works initiative noted there are 3.2 million fewer Americans in the labor force today as compared to pre-pandemic. Alicia Frieze, workforce development director with the Council Bluffs Area Chamber of Commerce, said her office has identified four key targets when it comes to labor.

“The four areas we continuously focus on is we want to reduce the [labor] turnover of our businesses,” she said. “The aggregated turnover was estimated to be 33%, and we want to help businesses reduce to a healthy 10%. We also want to increase the numbers in our labor pool; we want to see that around 80% [of population].

“We also want to increase brain gain as it was estimated less than 40% of the labor pool has any continuing education certifications. And then we want to increase the number of fully funded apprenticeship programs, which ties in well with supporting the other three initiatives.”

Frieze has spearheaded several initiatives to meet these objectives, helping grow programs to assist companies in creating the kind of environment employees want to stick around.

Another initiative is to help women reenter the local workforce. According to Data USA, men in Council Bluffs earn incomes 1.35 times higher than women, while the percentage of women living in poverty outpaces men from age 18 on. Launched in July, L.I.F.T. Mentoring Program, which stands for Leveraging Individual Female Talent, is a program of the Council Bluffs Area Chamber of Commerce and Human Resource Association of the Midlands. The joint endeavor with the Business Ethics Alliance aims to help women know their worth and compete in the workplace.

“One well-known statistic is 80% of women will not apply for a job if they don’t meet 100% of the job requirements,” Frieze said. “This mentorship program will provide for women who have left the workforce more than a year ago to be paired with a female HR manager and go through a six-month mentorship program to regain confidence to come back into the workforce and get reintroduced into the community.”

Iowa Western Community College is another key partner in the drive to produce more workers. Dr. Dan Kinney, IWCC president, said the college’s effectiveness in curriculum and programming begins with its relationships in the business community.

Matt Mancuso, executive director of the IWCC economic and workforce development department, said another change has been to shorten the distance between the classroom and the workplace.

“With the unemployment so low, we’ve looked at a couple different things and the first thing is getting them a shorter time for training, getting them the basic skills and then going into a company and getting trained up with that company,” he said. “We used to have a 120-hour welding class and we shortened that to 40 hours before they go into a company and get more training. We’ve combined a lot of programs so that working individuals can participate in those programs. We can’t do an 8-5 program very easily anymore.”

Kinney said many of the things the college is implementing are in step with the changing demands on higher education in general.

“I think education is going to change dramatically over the next few years. It’s going to go away from the traditional classroom-type stuff to more nontraditional online,” he said. “I think we’re going to go more from the credit side to the noncredit side to fill the workforce because that’s where we can do it a little bit quicker.”

None of these amenities mean much if there is no housing for new people to come home to. Housing inventory has been dire of late, and that’s a challenge for the city’s growth going forward, said Brandon Garrett, chief of staff with the city of Council Bluffs.

“What we’ve noticed through listings as one indicator is there are very few houses for sale at any price range,” he said. “There have been periods of time where there have been less than five houses [listed] between $200,000 and $350,000. On the rental market, there’s anecdotal data showing there’s no place for anyone to rent, and apartment complexes are generally full.”

Garrett said the city has taken a hard look at streamlining the permitting process for developers wanting to build but has also found itself subject to some of the same challenges when putting in the basic infrastructure ahead of those developments.

“We have noticed similar delays in items impacted by supply chain, from metal to plastic to even concrete,” he said. “Speaking from experience, the city partnered with some private developers on a mixed-income housing development here in Council Bluffs and the water lines were delayed because the pipes and water mains were delayed by several months.”

In that case the city showed flexibility, Garrett said, allowing other elements of construction to move forward out of the regular order. The city has also taken a leadership role in jump-starting a housing development on its own to help balance supply and demand.

“The city used $4.2 million of ARPA (American Rescue Plan Act) funds to purchase 90 acres near Lake Manawa on the south end of town,” he said. “The intention there will be to develop that as a mixed-income, mixed-use kind of neighborhood with a variety of housing types – small, single-family, attached single-family, townhomes, rowhouses, apartments – all in one development in order to help bring on more affordable housing supply.

“Another approach the city is taking is looking at infill in our riverfront, First Avenue and West Broadway corridors. That being primarily mixed-use and multi-family, being more of a connection to downtown Omaha.”

Another foundational element of growth is providing a community where people want to live. Placemaking has thus increased in importance as city leaders work to create the amenities that attract and retain new residents.

“Placemaking is an effort to capitalize on the assets, and more importantly on the potential, that a community has with an expressed intention of creating a community where people want to live,” said Pete Tulipana, president and CEO of Southwest Iowa Nonprofit for Collective Impact (SINC). “It’s becoming increasingly more critical for a couple of reasons, perhaps most importantly that for the younger generation that’s coming up, it’s higher on their list of critical importance in terms of where they live.”

Tulipana points to a number of strides the community has made in creating a cohesive sense of place, starting with the riverfront.

“You obviously have to look at your community’s assets and maximize those assets,” he said. “In Council Bluffs we identified one of the community assets that we had that other communities don’t — the river. And there was a strong desire for people to get back to the river and to use the river as a source of recreational opportunity.

“But I would also argue there are some basic amenities that communities need to build into their plan that all communities need, no matter how large or small. Even the tiniest of towns, you’ll see a little park where maybe they only have a teeter-totter and a swing, but it’s still a place where kids can go and swing and play and run and people can have a family picnic.”

Drew Kamp, president and CEO of the Council Bluffs Area Chamber of Commerce, said placemaking has always existed in one form or another, but modern urban planning has made the process more intentional than in the past. In doing so, the city continues to make great strides, such as the observation and climbing tower, caving experience, treetop walk, streambank stabilization, hiking trails and other amenities that have come online or will in the near future.

“It definitely has to be deliberate, and you have to have the right people on board,” he said. “We need to have the business community and the chamber on board. We need the city and the county for their parks and some of the resources they can bring to bear. We need nonprofits who have an interest in bringing those things to bear as well.

“It’s really just getting those all on the same page to really invest in those existing pieces of infrastructure and identify where there might be new pieces added, whether to an existing infrastructure or to more of the opportunities that aren’t already there that with strategy and planning that can be implemented over a long-term plan.”