On the Go: An Update on Transportation Initiatives

All across Omaha, transportation and city professionals are making progress in a variety of construction projects that will make the city more accessible and efficient. The city’s Capital Improvement Program (CIP) is adopted annually, alongside the city’s budget and helps coordinate major projects that involve Omaha’s streets, parks, sewer systems, public facilities, and other infrastructure. In addition to this, the Nebraska Department of Transportation is also working diligently to improve interstates and freeways. 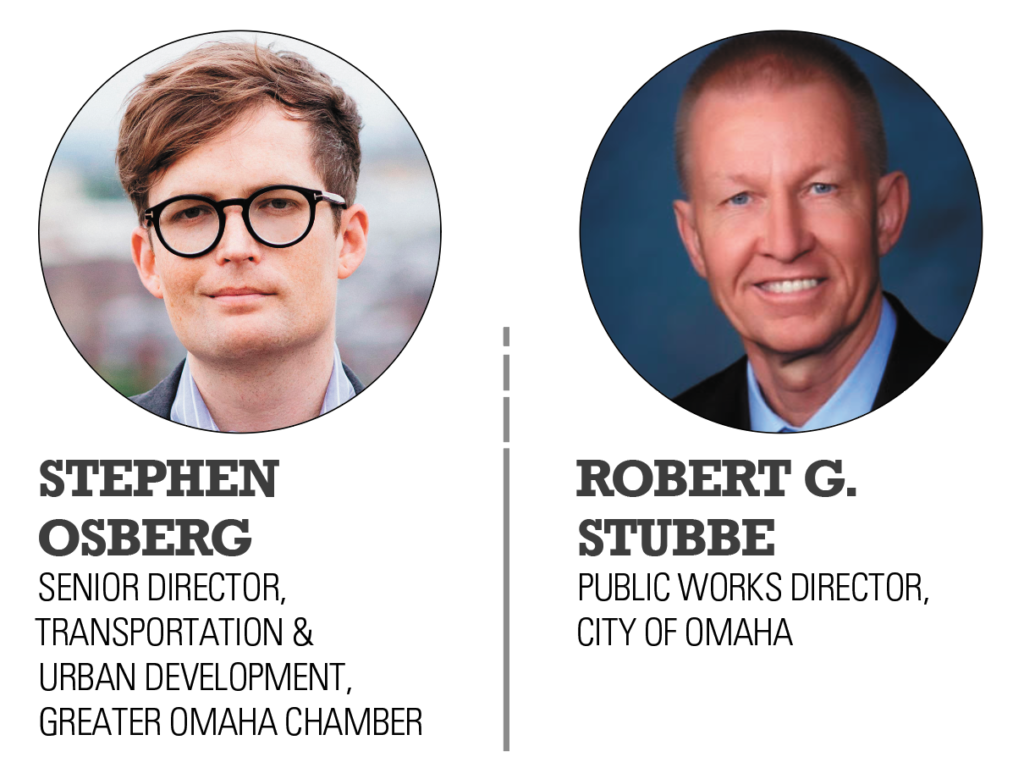 Three bridge projects began in March 2021 on I-480 and US-75. Two of the projects are scheduled for completion in 2022, and the final Missouri River approach bridges beginning at 20th Street should be completed in late spring 2023. The projects impact 77,000 vehicles per day.

There are also 12 bridges at the I-680/US-6 interchange that are being worked on. They are being repaired with an asphalt surface overlay placement. This impacts 66,000 to 133,000 vehicles per day and is slated to be complete this fall.

“These existing projects are all about asset preservation, which allows us to provide a maximum lifespan for the existing infrastructure,” explained Tim Weander, District 2 engineer for the Nebraska Department of Transportation. “The projects will assure we have a good sustainable transportation system into the future so future funding can be utilized on needed expansions and further preservation needs.”

One of Omaha’s most significant projects is the development of a streetcar through the city’s urban core. This month, the Omaha Streetcar Authority (OSA) is expected to approve the streetcar route. Discussions with the Nebraska Department of Transportation are happening on how to share the cost of modifying current bridges for the streetcar.

“I am excited to see the streetcar move from concept to reality,” said Stephen Osberg, senior director of transportation and urban development at the Greater Omaha Chamber. “The project is in the early phases of engineering, which will continue through 2024 … the purpose of the streetcar is to enable larger-scale development, which brings more tax revenue to local governments and offers a livelier urban environment that is attractive to many people. It will be fun to watch the district evolve.”

The North Freeway from Parker Street to Fort Street will undergo an asphalt resurfacing project and includes bridge repair and painting on seven bridges over US-75. This is scheduled for construction in 2023, with completion in 2024. Bridges from 12th Street to the Missouri River will be repainted and are scheduled for 2024.

To eliminate traffic fatalities, Farnam Street through the Blackstone District is being reconfigured. Todd Pfitzer, city engineer with the city of Omaha noted that a plan is currently in development.

“The Farnam ‘Main Street’ through Blackstone will reflect a different design tone than a section of Farnam a mile west in the middle of the neighborhood, versus a section a mile east in the middle of downtown,” he said. “The design and construction will be more context-sensitive than in past years … in the past there was more emphasis on moving traffic or the ‘efficiency’ of the roadway.

“With Vision Zero, safety becomes a very primary focus and the choice to implement roundabouts, while slightly less efficient than updated traffic signals would have been, is the safest alternative and will slow traffic through the area…these changes will impact our community in a positive way.”