Unsung Heroes: Engineers Pave Way for the Future with Infrastructure

They may not be the largest projects, by dollar value or by sheer scope and size. They may not be the “sexiest” projects. But Midlands engineering firms are leaving big, responsible footprints, near and farther afield, with partnerships and undertakings that are truly transformative for the communities they serve, and the services they support.

These are the “unsung” projects, the ones that for one reason or other, seem to fly under the radar despite the differences they make for our everyday lives. 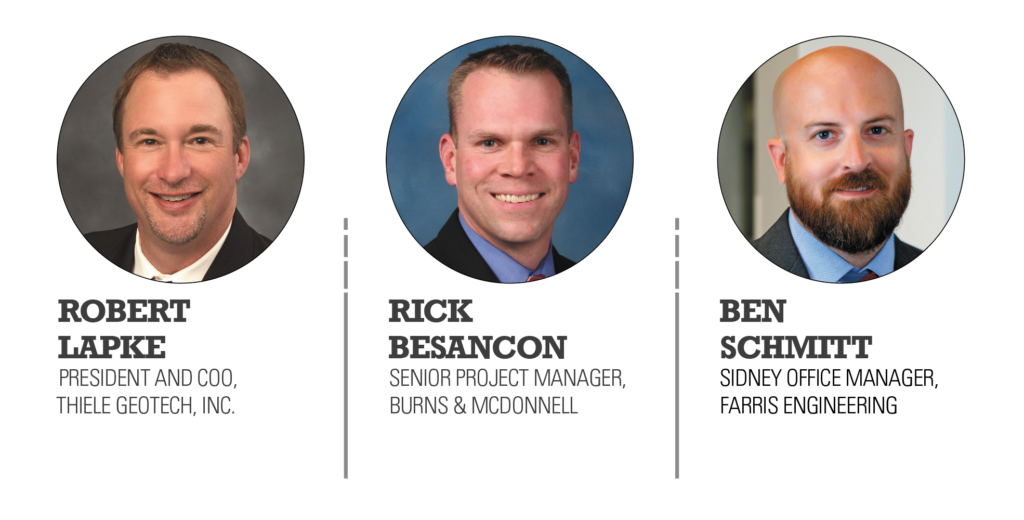 When asked about deserving projects that fit the bill, Thiele Geotech President and Chief Operating Officer Robert Lapke emphasized the firm’s work on a variety of sewer and street projects for the city of Omaha. Lapke indicated that its work on the CSO 119 South Barrel Conversion, Thomas Creek Siphon Replacement, Q Street Improvements and 156th Street improvements are just the tip of the iceberg.

“These projects don’t receive much fanfare but are critically important to the citizens that live here,” he summed up. “People often take for granted that the sewers just work and that paved streets allow them to move about the city every day. There is a considerable amount of engineering design and planning that goes into these projects to make them function effectively.”

While Lapke said Thiele Geotech understands that people don’t like roads being torn up or closed during construction: “The long-term benefits of these improvements outweigh the inconvenience experienced during construction. We are happy to be one of the many partners working towards improving our city.”

As part of the historic Omaha Combined Sewer Overflow (CSO) program, the Gilmore Avenue project is “designed to improve water quality.” Besancon said the project included a watershed of around 350 acres, and features the design and construction of a regional detention basin; 3,000 linear feet of large-diameter storm sewer interceptor; new storm and sanitary sewer collection systems spanning 150 acres; and “green” infrastructure designed with the likes of better water quality in mind. The project largely, Besancon said, removes stream flows from the combined sewer system and provides neighborhood sewer separation, which aligns with the CSO program’s goals.

“Over half the watershed is in Bellevue,” Besancon explained. “A small, intermittent drainage conveys flow from Bellevue to the Omaha CSO.”

He spoke to other improvements, such as how a brick sewer is being replaced by a larger, reinforced concrete pipe storm sewer and a clay sanitary sewer.

“Because the project watershed spanned two cities and counties, significant coordination was performed to keep an open dialogue with both communities,” Besancon said, while referencing “design and public engagement issues.”

The firm developed virtual tools to add to its public engagement toolbox in 2020.

Another nod to both project features and adaptability, the aforementioned storm sewer crossed two mainlines of the Union Pacific Railroad and underneath a Nebraska Department of Roads viaduct. So, Besancon said, the large-diameter storm pipe will be tunneled under the railroad, tied into an existing stub out from a previous project.

“As with many sewer separation projects, neighborhood disruption was a major concern,” he said. “Our team met with homeowners associations, local business groups and individuals throughout the project area to discuss the project’s overall goals, gain insight regarding residents’ concerns and test design considerations.”

As it was a mature neighborhood, Besancon continued, his team designed the new alignment to reduce the impact on trees and other landscaping.

“We used trenchless installation techniques, specifically pilot tube installation, to reduce disruption in the neighborhood and reduce the impact on adjacent utilities and trees,” he said.

He added that the firm also provided a plan for tree planting and replacement, which included rigorous requirements for tree trimming and root pruning during the construction process.

Farris Engineering jumped at the opportunity to highlight its considerable partnerships with the likes of the Bureau of Indian Affairs.

“Native American nations have lived connected with nature and their community for thousands of years,” said Ben M. Schmitt, a professional engineer who manages the firm’s Sidney office. “Most of these communities are located far from even small towns in rural areas. These remote and sometimes isolated locations can prove to be a challenge when accessing educational, medical and mental health needs.”

Referencing Farris’ 55-year presence and five locations spread across the Midwest, High Plains and Rocky Mountain areas, Schmitt noted how the firm is able to extend its reach into many native communities – improving facilities that may have only been seen by members of the local tribe.

“Farris has a long history of providing mechanical and electrical design services for projects that serve American Indians, Indian tribes and Alaska Natives through indefinite delivery/indefinite quantity (IDIQ) contracts with the Indian Health Service (IHS) and the Bureau of Indian Affairs (BIA),” he explained. “Farris’ passion for facilities improvement has afforded them the opportunity to be involved in new construction and renovations to hundreds of facilities for American Indians in Arizona, Kansas, Montana, Nebraska, New Mexico, North Dakota and South Dakota. But some of these buildings that Farris helps bring to life are not always on the beaten path.”

For instance, as part of an aforementioned IHS IDIQ, the Pueblo Pintado Health Center is being designed as a new 121,500-square-foot, modern and technologically advanced outpatient clinic. Many specialties are slated, according to Schmitt, to care for the needs of 6,000 American Indian and Alaskan Natives in the Crownpoint Service Unit of Navajo Nation (located in northwest New Mexico and northeast Arizona).

“With an estimated $72.5 million construction budget, this is far from a strip-mall clinic, as the showcase facility is targeting LEED Gold certification and is being constructed in a very remote setting to provide the best centralized service to the local population,” Schmitt asserted.

The all-in-one, one-stop facility is poised to serve a 40-plus mile radius for families to visit. Schmitt said its features include a number of specialty clinics and services not limited to pharmacy, diagnostic imaging (mammography and radiology), dental, primary care, mental health, eye care and audiology. Additionally, a helipad will help to fulfill emergency medical services needs in such a remote area.

“One of the more unique design aspects was that Farris Engineering has been privileged to participate in steering committee meetings with IHS representatives and elected members of the community,” Schmitt added. “The process has been a wonderful lesson on the cultural values and traditions of the community and learning how our designs can impact patient comfort – both physically and mentally – and induce a positive state of mind.”

With an eye on tomorrow, Professional Engineer and Civil Engineering Project Manager Caleb Beasley spotlighted E & A Consulting Group, Inc.’s work on three major developments in the 180th Street and Giles Road region. He said each will have an “impact larger than the footprint of the given development.”

“Each development was constructed concurrent with the 180th and Giles roadway infrastructure,” Beasley said.

He acknowledged that the roadway infrastructure has received some publicity (as part of the CONNECTSarpy project).

“However, it’s unlikely the roadway improvements could have moved forward without these three developments,” he emphasized. “The developers dedicated right-of-way for the realignment of the roadways needed in order to minimize the bridge length over the South Papillion Creek and railroad tracks.”

He also referred to how these developers graded the right-of-way for Sarpy County.

Overall, they moved 1.2 million cubic yards of dirt and, he said, provided an “economy of scale that the roadway projects alone would not have enjoyed.”

“This helped create a more economical project for the taxpayers of Sarpy County,” Beasley said.

Similarly, he reinforced how there are opportunities for private developers and government agencies to work together for the public good and to advance the causes of both parties or sectors.

When asked about what might be most surprising to the layperson about these projects (and the profession as a whole), Beasley started by highlighting the substantial changes that have occurred to the 180th and Giles area over a short time period.

“These were gravel roads that routinely experienced flooding with heavy rainfall,” he reminds readers. “The area was mostly agriculture, and will be transformed into a fully functional suburban mixed-use neighborhood once complete.”

Beasley indicated the public might be surprised by the amount of work that goes into a public-private partnership, characterizing the volume as “incredible.”

“But,” he continued, “it is work that can be accomplished when everyone works together. The coordination needed between the county and its engineer, the developers and their engineer, contractors, utility companies and legal teams began several months before any dirt was moved. It really does take a village, and no detail is too small.”