Generations of Americans can still recall the announcer’s voice proclaiming, “Mutual of Omaha’s Wild Kingdom!” at the beginning of each episode of the groundbreaking wildlife documentary series (1963-1988) that featured zoologist hosts Marlin Perkins and Jim Fowler, later joined by Peter Gros. Viewers might also remember the clever transitions to commercials for Mutual of Omaha insurance products (“Protect your kingdom…”); the show’s theme music; or even some of the geography, biology and wildlife mini-lessons from the family-friendly series.

Like many, wildlife expert Peter Gros grew up watching “Wild Kingdom” in the 1960s. As a youngster in rural Hudson Valley, he played in a yard that backed to woods and wildlife.

“I was immersed in nature,” he said. “You might say I was sort of hardwired to this as a career.”

In 1986, Gros joined “Wild Kingdom” as a co-host, staying with the show until its first run ended two years later.

“Watching Marlin Perkins with Jim Fowler in these amazing locations around the world sort of set the hook that this was something I wanted to do someday,” he said. “It was a dream come true.”

Gros’s connection to the animal kingdom goes well beyond his time with “Wild Kingdom,” encompassing four decades of experience. He served as Marine World/Africa USA’s vice president and director of land animals, established breeding programs for hundreds of endangered species, and developed a rehabilitation program for birds of prey and the largest captive breeding colony of ostriches in the U.S. He’s a licensed Exhibition & Animal Educator for the U.S. Department of Agriculture and is involved with the American Zoo and Aquariums Association, Association of Wildlife Educators, and Zoological Association of America. Gros also serves on the board of directors of the Suisun Marsh Natural History Association and as a trustee for the Cheetah Conservation Fund.

He continues to be a frequent conservation and preservation lecturer with a mission to “excite people about wildlife and teach them to understand and care about the natural world.”

“We’re going to be continuing to inspire a generation of people to commit to helping protect the natural world,” Gros said. 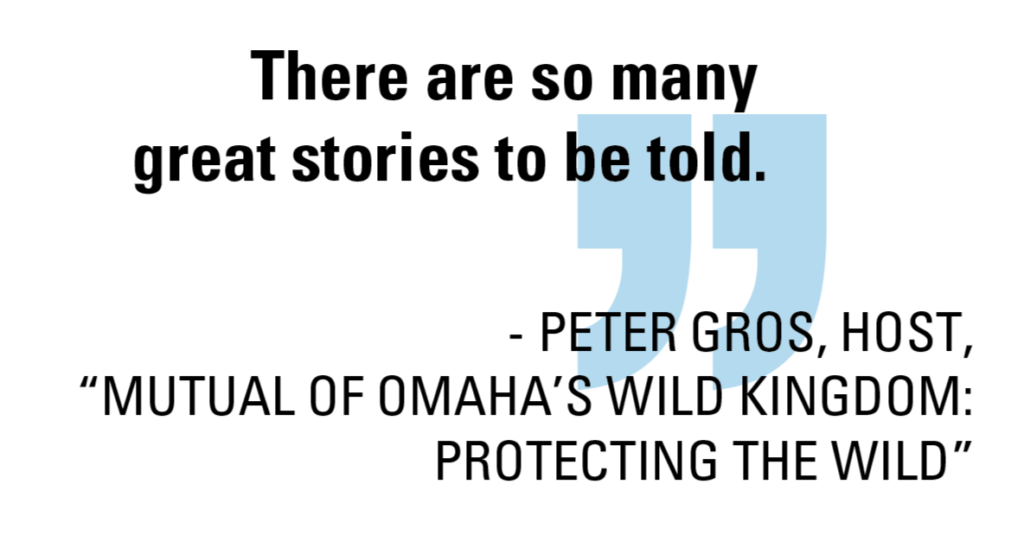 The first episode of “Protecting the Wild,” which premieres on January 2, exemplifies the theme of the series, following two black bear cubs in the aftermath of a wildfire that encroached on their Pacific Northwest habitat. The seriously injured cubs were successfully treated and rehabilitated.

“They had to be treated with no contact with people while they were awake. So, they were tranquilized and treated each time and they were still wild; there’s a fear of people. We watched their progress over the year,” Gros said.

“The highlight of this show for me is that eventually we took them up to the Cascade Mountains in the state of Washington, way up in the forest, and turned them loose. And they ran back to where they belong in the wild. Like many of the original shows, it’s very moving.”

The public already hears plenty about concerns with wildlife and the environment, Gros said. He wanted to tell a different story.

“Our focus was to talk to experts in the field and partner with them, in some cases, about successful projects so we can create hope and show this next generation that yes, indeed, we still do have environmental problems but if we will work together, we can solve them,” he said, citing examples such as supporting the otter population in Monterey Bay, which feeds on sea urchins and keeps them from overpopulating and devastating the kelp essential to the local ecosystem.

“These are the kinds of stories that people are going to see,” he said. “They all are positive, successful stories about all the work that takes to make these good things happen for conservation.”

The new series, like the original, is suitable for families to watch together.

“We’re trying to target everybody who’s interested in saving wildlife in the natural world. This is not necessarily age-specific, from my point of view. So, there’s a nice connection with the original show,” Gros said. “In some cases, you [even] hear Mr. Perkins speak, or Mr. Fowler.” 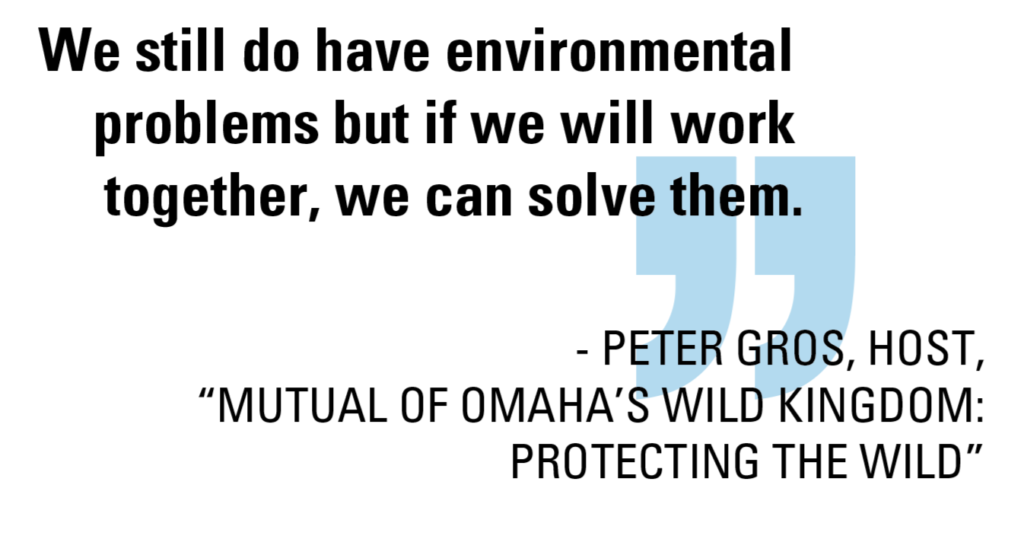 Gros has countless engaging stories about his animal encounters over the years — both within and outside of “Wild Kingdom” — from dodging rocks flung by African elephants in Zambia to being painfully bitten by an Andean Condor on camera. He chuckles as he recalls a long-ago “Wild Kingdom” adventure where he entered shark-inhabited waters off the coast of Australia in a shark cage — wearing a vivid yellow wetsuit to see if sharks were attracted to bright colors. An evolution in production, however, means filming sharks in Monterey Bay for the new series was a contrasting experience, he said.

“We had a drone just over the surface of the water,” Gros said. “I was safely on a boat with a monitor and a laptop.

“I think back to the days when we were dragging 70-pound cameras around and setting up the film, and if the light changed you lost continuity… The major difference is now with everything being digital, we can film with drones, we can film with heat-sensor cameras and with motion-sensor cameras,” he said. “In many cases when we film wildlife now, they don’t even know they’re being filmed, so you see very natural behavior in the new show.”

He enjoyed his return to the field, Gros said, and he’s proud how the first season of the new series has turned out.

“My expertise had to do more with the breeding and raising of a dangerous species and designing free-roaming animal displays. So, for me to spend so much of my career doing that, and then being able to travel all over the world, filming a wildlife with experts and researchers and scientists and biologists and telling their story to people back home—that to me was such a treat,” he said. “I’m just honored to be able to do this with our new show. There are so many great stories to be told.”

2: “SPIRIT OF THE CONDOR” (Airing Jan. 13)
Peter Gros hits the road to visit top experts in the field for a first-hand look at trials and tribulations of restoring North America’s largest bird, the California condor.

3: “NUCLEAR CROCS OF THE EVERGLADES” (Airing Jan. 20)
Join Peter Gros for an exploration into work being done to protect and restore the American crocodile population with the Croc Team at Turkey Point Clean Energy facility.

4: “CROSSING COUGAR COUNTRY” (Airing Jan. 27)
Join Peter Gros, Naturalist David Mizejewski and Wildlife Advocate Beth Pratt as they travel from Florida to Los Angeles to learn what experts are doing to protect big cats and what we can do to help.

5: “LOST CORAL OF KEY WEST” (Airing Feb. 3)
Join Peter Gros as he follows the incredible team of scientists at the Association of Zoos and Aquariums’ Florida Reef Tract Rescue Project defying the odds to reproduce, rebuild and restore Florida’s reefs one single piece at a time.

7: “RETURN OF THE TURTLES & MANATEES” (Airing March 24)
Peter Gros and Naturalist David Mizejewski visit Florida to meet with top experts as they work to protect aquatic creatures, including manatees and sea turtles, from the threat of extinction.

8: “TALE OF THE RED WOLF” (Airing March 31)
Nature depends on apex predators and keystone species to survive and thrive. Wolves are both. Peter Gros shares the incredible journey to recover and reintroduce these magnificent predators to the wild.

9: “SEA OTTER SANCTUARY” (Airing April 7)
Join Peter Gros as he dives in with some of the top experts in the field in Monterey Bay to learn what we can do to protect and preserve these adorable creatures that play a vital role in maintaining the balance of habitats.

10: “SAVING THE MASKED BANDIT” (Airing April 14)
Travel from Colorado to Wyoming with Peter Gros and special guest Jeff the Nature Guy to hear the story of how a farm dog and years of recovery efforts brought the return of black-footed ferrets to the prairie.